Generous farmers from the Weenen Farmer’s Association in KZN have reached out to fellow farmers in Steytlerville in the Eastern Cape, by donating 1200 bales of Lucerne to the drought-afflicted area.

“After all the good rains that we have had in Weenen, a few farmers here had a surplus of Lucerne and so we made an inquiry with Kwanalu, to find out if there was still a need for animal food in some areas following the call by Agri SA’s drought relief programme,” explains Shane Reynolds, a Weenen farmer and chairperson of the Weenen Farmer’s Association.

Farmers in the Steytlerville area were identified as being in dire need of animal feed following the catastrophic effects of the ongoing drought in the Eastern Cape over the past few years.

The transport of the Lucerne was also generously provided at below cost by Winberg Transport and by Agri SA through funds raised from the Agri SA Drought Disaster Fund.

“Farmers of the very dry Steytlerville district are so grateful for the wonderful donation of two Super-link truckloads of Lucerne from the Weenen farmers,” said Peter Knoeson, chairman of the Steytlerville Agricultural Association. 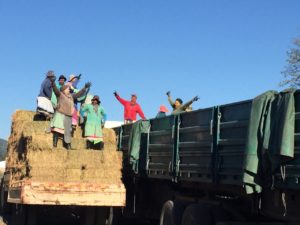 “Steytlerville and the surrounding area has received very welcome rains in the past few weeks but there is still a long way to go before we are out of the woods. Donations like this make it possible for farmers to hold their heads high, stay positive and to endure the situation a little longer. As seasoned agriculturists, these farmers are familiar with droughts and normally anticipate the dry seasons, but this one has been really mean, long and extremely taxing. Without help from these fellow farmers, our lasting power would have been exhausted a long time ago,” Knoesen went on to say.

“Once again we are overwhelmed by the compassion and generosity of our farmers. Thank you to Shane and the farmers of the Weenen Farmer’s Association for this incredibly kind gesture. Also thanks need to go to Winberg Transports, Agri SA and all the generous individuals and companies who have contributed to the Agri SA Drought Disaster Fund,” said CEO of Kwanalu, Sandy La Marque. 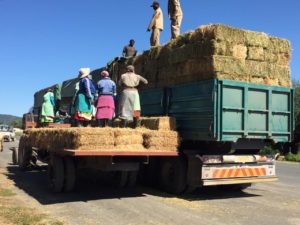 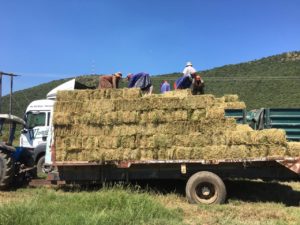