Well-respected Makhathini flats cotton and vegetable farmer Phenias Gumede has been elected as President of the KZN Agricultural Union, Kwanalu.

Gumede will be closely supported by vice-Presidents, Andy Buchan, who served as Kwanalu President from 2016 to 2019 and Peter John Hassard.

Gumede brings his vast experience as both a farmer and at a leadership level, in local and national organised agriculture, to his role as President at a critical time for the industry.

“Throughout his years serving on the Kwanalu board and as vice-President, Phenias has always brought a sound and logical voice to the table. He understands the challenges facing all farmers and is a recognised industry leader; we are delighted at his appointment and Kwanalu couldn’t be more privileged to have Phenias lead our organisation,” said CEO of Kwanalu, Sandy La Marque.

Born and raised as the son of a small scale subsistence farmer on the Makhathini flats, near Jozini, Gumede began farming at an early age, assisting his father on their six hectare farm, which he has since grown to 150 hectares of cotton production. On a further 250 hectares of leased land in the same area, Gumede farms both winter vegetables and cotton, mostly to supplement the cash flow for the operation of the Makhathini Cotton Gin, of which he has been Managing Director since 2010.

Gumede attributes his ability to juggle his many roles and responsibilities in the sector to his modest upbringing and his intuitive passion for farming and all things agricultural. He fondly recalls waking up at 4am daily to work on his father’s fields, with an old-fashioned ox-driven plough, before heading off to school.

“I didn’t mind. Farming is what I loved doing more than anything else – it is easy to work hard and give of yourself for something that you are passionate about,” said Gumede.

President of Agri SA, Dan Kriek, congratulated Gumede on his election saying that he is widely respected in organised agriculture.

“In my speech at the annual Agri SA congress two weeks ago I emphasized the importance of inclusivity, not only within Agri SA, but within the agricultural sector as a whole.

Phenias is a true leader and his contribution as Agri SA’s vice President is immense and visionary. We are in a critical time in South Africa and I believe that Phenias will lead Kwanalu with distinction. We need leaders that will lead in an inclusive manner and Phenias has all the skills, knowledge and experience to lead all farmers in KZN. Phenias has my full support and we are honoured and proud to have him within our ranks,” said Kriek.

Although farming is his first passion, Gumede places a lot of emphasis on giving back to agriculture. Besides his leadership positions held at Agri SA and Kwanalu, he also serves on the board for the SA Cotton Producers Organisation, is vice Chairperson of Cotton SA and serves as Chairperson of the KZN Cotton Growers Association, is a board member of the  Southern African Confederation of Agricultural Union (SACAU), representing 18 southern African countries and a board member of South African Ginners Association. He also serves on the Lima Rural Development Foundation’s board and is the founding member of various farmers associations and agriculture co-operatives in the Makhathini area.

“The way forward, and I believe there is one, is for everyone in the industry – the farmer, farming co-operatives, labour unions, local government and government to work together in finding practical solutions for the challenges facing the sector,” said Gumede. 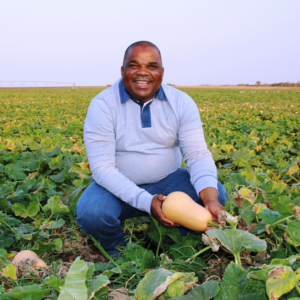