We have released our annual analysis of attacks and murders which took place in farming areas in the province in 2018. The report, which includes information and statistics collected by the Kwanalu Security Desk and verified with relevant sources, shows attacks and murders on farms in 2018 to be at its lowest in 16 years.

The report also determines, that in all cases where evidence has been led, that socio-economic issues are the reasons for the attacks with no direct link to land, politics or race. The report also highlights that in many of the attacks inadequate security measures were in place, and that perpetrators were not afraid to attack in daylight hours.

“The safety and security of our members is of utmost importance to us and a strategic focus area of the organisation. As such we have a duty to empower farmers with knowledge and fact-based statistics with our annual analysis of farm attacks and murders to ensure our members and associated security stakeholders are fully and correctly informed about the nature and circumstances of crimes that have taken place in farms in the province, so that they are even better prepared,” said Sandy La Marque.

Dissemination of the data and statistics collected by Kwanalu between 1 January to 31 December 2018, offers farmers and affected stakeholders’ insight and relevant information based on factual evidence rather than inaccurate reports as reported by some. The data in Kwanalu’s report was conducted in commercial farming areas and includes all people who live on commercial farms in these areas.

The statistics presented in the 2018 report indicate that one murder took place in the province, involving three attackers who gained access at night but digging underneath an electric fence and breaking a door. No arrest in this case has as yet taken place.

There were 24 farm attacks in 2018 in the province with the majority taking place on a Tuesday and a Thursday. Twelve of the 24 attacks took place in the farm house, 7 of the 24 in the farm yard and 5 of the 24 on the farm. Weapons used in these 24 attacks are broken down as follows: 14 firearms, 4 knives/ axe/ bush knives and 6 “other”. The total number of attackers in the 24 cases are calculated at 74 with the primary target indicating firearms and/or cash from wages or stock sales.

Commenting on the data, Sandy noted: “What is clear from the data in the 2018 report is that the reasons behind these attacks, as in the case of previous years, are not motivated by race, land or politics but rather by socio-economic circumstances that lead to opportunistic crimes”.

“We urge all farmers to use every security measure at their disposal and to regularly check that these measures are in working order, “said Sandy.

She also encouraged all farmers to join their local farmer/landowner associations to further provide farmers with access to security information and support. Of the 24 farm attacks and 1 murder, only 4 victims were members of Kwanalu.

“A vital role of organised agriculture is that of the safety and security of our members. As a body, we are able to represent farmers on the provincial structures of safety and security, are able to assist with crime follow-ups and assist members with advice on criminal matters and procedures, provide a direct link to the SAPS and provide expert evidence in court, as well as supply members with accurate and tangible information on best security practices,” said Sandy.

“From this data, we reiterate the need for farmers to remain vigilant at all times and look after themselves and those in their community by the forging of relationships, joining their local farmers’ associations and by building trust within local communities,” said Sandy. 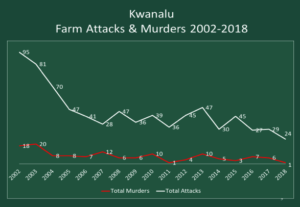