Following the brutal, and near fatal attack, on his life in 2013, people would not have blamed respected Kwanalu board member and well-known Hluhluwe game and cattle farmer, Peter John (PJ) Hassard, for throwing in the towel and giving up on the only life he had ever known. 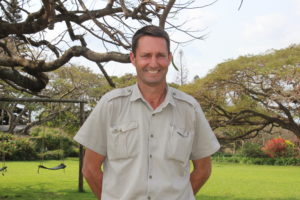 Instead he continues, not only to farm, but also encourages his fellow farmers, friends and colleagues to remain optimistic despite challenges faced by farmers in SA today. His love for his family, their future and his love for SA, he believes, gives him the courage and resilience to remain positive.

Speaking at the 2015 Kwanalu Annual Congress, held in September at the Royal Show grounds in Pietermaritzburg, PJ addressed his fellow farmers, encouraging them to be positive, rather than downcast, in uncertain or difficult times.

“Surround yourself with positive, forward thinking people and always see what you can gain, not how much you can lose out of a situation. Get involved with your community and local farmer’s associations and always be prepared to help others,” said PJ, while sharing the story of his near fatal attack in May of 2013.

At 5:30am on 21 May, 2013, PJ was attacked by five gunmen and subsequently shot in the stomach, outside his front gate on his farm in Hluhluwe. He miraculously survived a severe liver wound and returned home after spending four months in The Bay Hospital in Richards Bay.

Despite his experience and the recent culture of negativity that has consumed the Hluhluwe region, PJ says that he is committed to working with the community to bring about change so that he and his children can live out their lives there.

“I look at my attack as an obstacle in my past and something that I have to get over. There are steps in life and sometimes you hit barriers. It’s how you overcome them that counts,” he said.

“I will carry on farming – I chose this life and there is nothing else I want to do,” he continued.

PJ, together with his father, Peter Hassard, a former president of the KZN Rugby Union, runs a hunting outfitting company called Silversands Safaris. He also farms between 1500 and 1800 head of beef cattle on their 7000 ha family game ranch, which dates back to 1915.  PJ is the 4th generation Hassard to farm the land.

As president of the Hluhluwe Farmers Association and vice chairman of the Red Meat Producers Organisation, PJ is a well-known and respected leader and trusted liaison among both his fellow Hluhluwe farmers and the local community.

On top of that, he is the director of the Munyawana Conservation Trust, a non-profit organisation that raises funds for the Nyathi Anti-Pouching Unit which tackles rampant rhino poaching in Zululand. This year the unit has arrested 64 people in 35 incidents, apprehended 23 weapons and 125 rounds of ammunition.

“I have the local chief’s number on my cell phone. To make it work, you have to be open and honest and always prepared to help, and not just with your neighbour but with your local chief or community leaders too,” he said.

“I strive to put my head on my pillow each night, knowing that I have done enough,” he said.