Vice- President of Kwanalu, KwaZulu-Natal cotton farmer ç, who also serves as the Deputy-President of Agri SA, credits his achievements, both in farming and in his administrative involvement in national and local organized agriculture, simply to having passion. Passion for farming his land, and passion for a vision of a positive future for agriculture and for all farmers in South Africa. 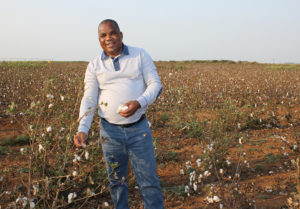 Born and raised as the son of a small scale subsistence farmer on the Makhathini flats, near Jozini, Gumede began farming at an early age, assisting his father on their six hectare farm, which he has since grown to 50 hectares of cotton production employing 48 people. On a further 250 hectares of leased land in the same area, Gumede farms both winter vegetables and cotton, mostly to supplement the cash flow for the operation of the Makhathini Cotton Gin, of which he has been Managing Director since 2010.

In 2007 the Makhathini Cotton Gin liquidated, resulting in the closure of the gin during harvest, a crucial time for cotton farmers. As a result of Gumede’s persistent negotiations and belief in the cotton production potential of local farmers, government purchased the Makhatini Cotton Gin in 2010 and handed it over to the Ubongwa Cotton Farmer Co-operative, appointing Gumede as Managing Director.

At present the gin processes 600 tons per season but, as part of Gumede’s five year plan, the intention is to increase this production to 2 500 tons per season and once again establish the Makhathini Flats as the cotton capital of KZN.

As part of Gumede’s plan to maximize the agricultural potential of the area, in August this year Gumede hosted a local “Farmers Day” to entice local farmers to turn back to cotton farming.

KZN MEC for Agriculture and Rural Development, Mr Cyril Xaba and Rural Development and Land Reform deputy minister, Mcebisi Skwatsha attended the event to understand the gin’s progress following the funding support for its refurbishment in 2010. Gumede hopes that in the near future, government will again “come to the party” by funding the start-up of 600 new cotton farmers in the region, which will in turn support the gin.

“I wanted to show the Ministers where their money was used and that, when put in the right, willing hands, rural development initiatives can work well,” said Gumede.

“I am hopeful that in five years’ time we will have a profitable ginnery that is of benefit to everyone – because this plant belongs to the community” he added.

Although farming is his first passion, Gumede places a lot of emphasis on giving back to agriculture. Besides his leadership positions held at Agri SA and Kwanalu, he also serves on the board for the SA Cotton Producers Organisation, as Vice Chairperson for Cotton SA and as Chairperson for the KZN Cotton Growers Association. He is also an active board member of the Lima Rural Development Foundation and if that isn’t enough, is the founding member of various farmers associations and agriculture co-operatives in the Makhathini area.

“Phenias has proven over and over that he is a valuable colleague in the agriculture sector, which is why he was re-elected as Deputy President of Kwanalu this year,” said CEO of Kwanalu, Sandy La Marque.

Gumede attributes his ability to juggle his many roles and responsibilities in the industry to his modest upbringing and his intuitive passion for farming and all things agricultural.  He fondly recalls waking up at 4am daily to work on his father’s fields, with an old-fashioned ox-driven plough, before heading off to school.

“I didn’t mind. Farming is what I loved doing more than anything else – it is easy to work hard and give of yourself for something that you are passionate about,” said Gumede.

His first job at Mjindi Farming, an enterprise for the Department of Development Aid (DDA) for the former government, meant that Gumede, right from the beginning of his career, interacted with many of the farmers in Makhathini almost daily.  He soon recognised a need for a unified agricultural voice in the area to strengthen the farmer’s hand in commercial dealings, and in 1988, formed the first farmers’ association in the area.

“I learned early on that farmers who stood together and shared resources and ideas were much stronger and more productive than if they tackled problems alone,” he said.

His role in saving and refurbishing the gin and more recently his dedication to restoring it to its full glory is true testament to Gumede’s generous attitude towards others and to agriculture in KZN and SA. His vision for the future of agriculture in SA is one of optimism that is a role model to others.

“The way forward, and I believe there is one, is for everyone in the industry – the farmer, farming co-operatives, labour unions, local government and government to work together in finding practical solutions to the difficulties we face,” he said.