Groenvlei commercial beef and Droughtmaster stud farmer, Rustin Shawe (37) has been selected as the Kwanalu 2018 KZN Young Farmer of the Year.

“This year’s entries make us proud of the vast farming talent we have in KZN,” Sandy La Marque, speaking at the event.

Rustin, farms with 1 850 commercial beef and Droughtmaster stud breeding herd, 1 000 follower heifers and 600 long yearlings on 8 600ha in Groenvlei near Utrecht, the northern mountainous region of KZN. With 16 years of farming experience and 15 years on the current farming set-up, Rustin has brought noted improvements to the family business namely with the development of his Droughtmaster stud which impressed the judges.

“The focus on my Droughtmaster stud has increased my weaning weights in my herd as well ensuring uniformity thanks to the predictability of the progeny of the Droughtmaster. These Droughtmaster are fast infiltrating my Grassfields Beef herd,” explains Rustin.

Other changes implemented by Rustin, that have contributed to the success of the business, include his 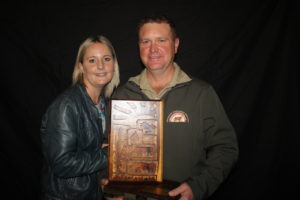 decision to keep all his heifer weaners every year and let “nature take it’s course”, to increase his herd sizes over the summer months, a decision to keep all bull calves thanks to a loan from the Landbank, the purchase of a 700ha grazing farm for summer veldt grazing and the building of four dams on the properties which have transformed and prolonged the life of his grazing paddocks. Grassfields Farm also boasts its own sale complex which hosts an annual production sale. Using social media as a means of marketing, Rustin hosts the annual sale of his Grassfields beef and Droughtmaster stud herds – a sale that is well known in the industry.

Rustin is an active community member and was the vice-president of the local farmers association, the Groenvlei  Boerevereniging.

On receiving his award, Rustin said the title was an honour and a privilege and that he looked forward to representing KZN farmers at the national event. He thanked his wife, Monick, for her support, his father for being his mentor and affording him the opportunity to farm, and his staff which he credited for the success of the business.

“If we are proactive I believe we have a great future in this country but that we all need to address the land issue as a critical part of a successful future in farming in SA,” said Rustin.

Sandy said, “It is always so rewarding that we in KZN can boast about such exceptional young farmers, who whilst respecting ways of old are embracing technology, innovative marketing means and international best practice, and combining these with skills and passion to achieve a farm business that can stand proud amongst the best in South Africa.”