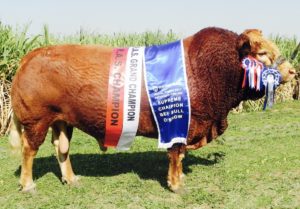 Malherbe won the much coveted title at last year’s Royal Agricultural Show beating competitors from top South African studs. La Rhone Millionaire was then invited to participate in the ALFA 2017 National Interbreed Championship in Parys in the Free State.

“We didn’t win there but Millionaire got some really great exposure and I am very proud of his achievements,” said Malherbe.

“It is fantastic to see women competiting and winning in this field; and we hope that this success story will encourage more women to actively participate and expose their involvement in agriculture,” said La Marque.