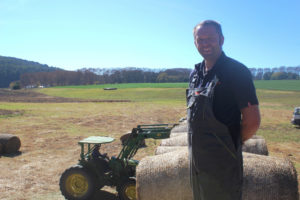 In an exceptional display of generosity, a KwaZulu-Natal farmer has come to the aid of his fellow farmers suffering from the crippling drought. JJ van de Velde, a Nottingham Road potato and maize farmer donated more than 800 bales of hay, destined for animal fodder, to drought-stricken Hluhluwe farmers.

“As KwaZulu-Natal farmers continue to battle with the severe drought, dying livestock and worsening conditions as we move into winter, this donation has come just in time and will hopefully remind others that the drought is far from over and that we need to stand together,” said Sandy La Marque, CEO of the KwaZulu-Natal Agricultural Union, Kwanalu.

Van de Velde said it was while watching a program on drought one Sunday evening that he saw and realised just how desperate farmers in some parts of the province were and decided to help. 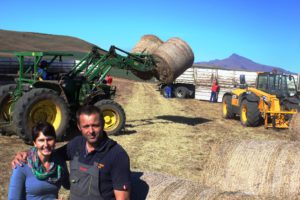 “Most farmers in KZN are feeling the effects of the drought and it has been very difficult for us all, but when I saw the hopeless look on that farmer’s face it struck a chord,” he said.

“For the first time in 16 years, I have had a good potato crop and figured that my good fortune could be shared with those who were not so lucky,” he added.

Van de Velde said he got in touch with Kwanalu, who identified Hluhluwe as a priority area.  Kwanalu has been working closely with AgriSA, and local farmers to help relieve the pressure of the drought on farmers in the northern parts of the province.

“Thousands of animals have already perished. Both commercial and subsistence farmers are desperate for assistance and are currently living from one day to the next, relying on whatever animal fodder is donated,” La Marque said.

“We have had some rain and now everyone thinks that the drought and all its problems are over, but it’s not true. We need to continue to pull together and help our fellow farmers around the country,” added van de Velde. 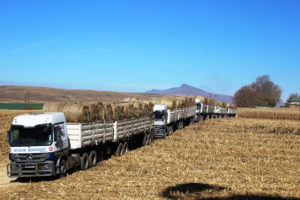 Van de Velde purchased R450 000 worth of cutting, raking and baling equipment to get the operation under way, an “investment” that he says “is all the more worthwhile,” as he was able to put it to good use.

Following his father’s lead, JP (Jan Peter) van de Velde (16), volunteered to spend his April holiday helping to cut, rake and bale hay as part of his entry into The President’s Award for Youth Empowerment – an international programme that helps young people develop through community service, adventure, skills and sports.

“It made perfect sense for me to give up my time to help bale the hay – I love farming, it’s what I want to do, so it wasn’t really that much effort,” said JP, a grade 10 pupil at Michaelhouse.

“Knowing that I would be helping other farmers made it even more worthwhile,” he added.

With financial assistance from Kwanalu and other generous donors, the bales were transported by 10 of Bencor Boerdery’s transport vehicles and were offloaded and distributed by Hluhluwe Farmers Association leader, PJ Hassard.

“We are grateful to Bencor Boerdery, who came on board and helped cover the majority of the enormous transport costs, which would have been in excess of R110 000,” La Marque said.

“This show of camaraderie amongst our farmers and businesses is truly an inspiration and the bales are a saving grace for our desperate farmers,’ said Hassard, who has been heavily involved in drought relief initiatives in his area.

“In times of crisis, it is important that South African’s pull together. Instead of taking an antagonistic, demoralised approach, we need to use whatever skills or resources we have to help,” he said.