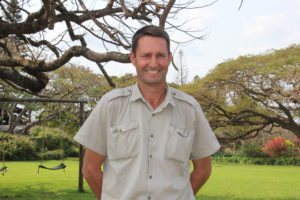 Farmers are much more than just food producers, they are the working cogs that turn the wheel and, in many cases the glue that binds communities. This is certainly the case in Hluhluwe, Northern KZN, where farmers have gone above and beyond the call of duty to keep water flowing to surrounding drought stricken communities.

The Hluhluwe Farmer’s Association, headed up by local game and cattle farmer, PJ Hassard, came to the rescue of the local community when the Mhlathuze water system, which supplies the UMkhanyakude or “big 5” district, failed to function due to desperately low water levels.

Hassard and a team of local farmers provided water pumps, a cable and the manpower needed to improve the system and allow the water to flow again.

“At this point in time, the only reason that the Hluhluwe town has any water at all, is because local farmers have “come to the party” to do the job,” said Hassard.

The Hluhluwe Dam, which supplies water to the UMkhanyakude district (which includes the town of Hluhluwe and its surrounding communities) is currently almost empty with some of these communities being without water since September 2015.

According to Hassard, the dam’s water level is at 13.4 million cubic meters which is just 16% of its capacity.

Despite help for these desperate communities, from The Department of Water and Sanitation in the form of 16 water trucks carting water from the Hluhluwe Dam, and from the Mhlathuze Water Board and the local municipality who installed a diesel pump, both solutions proved temporary with the diesel being stolen and the delivering of water unsustainable.

This is when Hassard decided to donate his own electric pump to keep the system going. He then mobilised the Hluhluwe Farmers Association, who donated the cable, while local farmers provided the man-power and expertise to install the pump. A second pump was later donated by another Hluhluwe farmer, Casper Bardenhorst.

“But this is a just a temporary solution – thanks to a bit of rain we have had, the dam is at around 16% but it goes down by a percentage each week. It is only a matter of days until it is completely empty,” he added.

CEO of Kwanalu, Sandy La Marque said the assistance by the Hluhluwe Farmer’s Association is a great lesson, for many communities around the country, of being prepared to find workable solutions in times of crisis

“It is truly inspiring to see the goodwill our farmers so generously display with no reward being looked for.  Selfless acts like this will go towards nation building , if we are willing to pull together and do something constructive, change will come,” said La Marque.