Behind some of the policy proposals and discussions on land redistribution in South Africa is a persistent notion that the country should establish ‘small-scale farms’ so that there could be more participants, and increase in productivity. This view was further shared by some participants at a conference organised by the Institute for Poverty, Land and Agrarian Studies (Plaas) the University of the Western Cape on 4-5 February 2019.

What we drew from the discussions is that this notion of ‘small-scale farms’ arises from the perception that most commercial farms in South Africa are large-scale and perceived to be inefficient compared to their smaller counterparts, implying therefore that these large-scale farms should be capped and subdivided. What the proponents of the ‘small-scale farms’ notion quite often forget is that small-scale family farms have been the dominant form of farming in South African commercial agriculture since the early years among all racial groups.

We have discussed what makes small-scale commercial farms on Business Day on 17 October 2018, generally arguing that turnover, or rather the level of net farm income, determines the farm size category, not the land size.

Before we digress, the data in Table 1 tell us that for most of the 20th century, around 50% of the so-called large-scale white commercial farmers operated on farm holdings smaller than 428 hectares on average (with more than 12 000 units below 86ha in 1993). Obviously these aggregate numbers do not tell us where these farms are located since many large-scale operators could farm on as small area as 20 hectares while very small businesses could be operated on very large tracts of land. So we always need to caution against using land size as a point of debate.

Most of these small family farms only survived through massive government support programmes in the form of various subsidies, exploitative labour legislation and practices and controlled marketing. But also, and very critically, expansive and well-staffed agricultural technical service centres in each farming district. The extension service and other government programmes supported these farmers and helped them to eke out a simple, but decent, livelihood. It was enough to sustain families and to send children to the local schools and universities.

Afrikaner empowerment through the apartheid system also helped these poor rural families to climb the social ladder to eventually move to non-agricultural jobs and sell their family farm to the more successful neighbour. This led to consolidation, increases in the size of farming units, concentration of farm ownership and eventually an increasing depopulation of the former ‘white’ rural areas. Banks, businesses and schools closed down as more and more families urbanised. 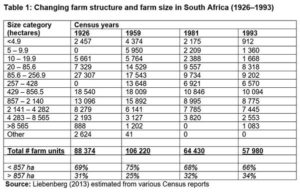 The Agricultural Census reports since 1993 have not presented any details on farm size and therefore it is not possible to track farm numbers and farm sizes. It is nevertheless true that there has been some form of consolidation but how much that has increased farm sizes are not known since the data is not available.

This situation is due to the fact that Stats SA has included only farmers registered to pay VAT in their more recent census reports: the most recent, for example, only reporting 39 900 farms. When one accounts for non-VAT-registered farms (VAT registration is only compulsory if the business turnover exceeds R1 million), the total number of commercial farmers is closer to 69 000, as shown in Table 2.

The reality is – as we argue above – this is not correct since the 39 000 number only refers to the VAT paying farmers. Interestingly the Stats SA sample frame for the 2018-2019 agricultural census is again based on the register of VAT paying farmers. This is now a total of 57 000 which suggests that there has been no drop in the number of commercial farmers since 1993.

It is however true that there has been increasing farm sizes for a small number of extensive grain and extensive grazing regions. But for the rest, farm sizes remain the same but the scale of businesses have increased rapidly due to vertical expansion, vertical integration and very importantly increasing of on-farm productivity through technological change and sustainable practices.

Here in lies the theoretical trap most commentators fell into when they talk of farm sizes – land vs business size. Classifying the scale of farming operations (small-scale versus large-scale) merely based on the size of the farmland also does not really make sense due to the variation of land quality and the productive potential of different pieces of land. For that reason, the assessment of turnover provides a much better indication of the scale of the farm operation.

Fortunately, all the agricultural censuses and surveys in recent years have used gross farm income (or turnover) to classify commercial farms. If we apply the Department of Trade and Industry’s official definition of small, medium and micro-sized enterprises – which is a turnover of R5m and below – then 96% of all commercial farmers can officially be classified as small and medium-sized enterprises.

This confirms again the fact that South Africa is a nation of relatively small family farms, many of them not providing full-time livelihoods to their owners. Therefore, the argument that South Africa is dominated by large commercial farms simply ignores the data or evidence, and is therefore misplaced.

– Professor Johann Kirsten is the director of the Bureau for Economic Research at Stellenbosch University, and Wandile Sihlobo is chief economist of the Agricultural Business Chamber of South Africa (Agbiz).