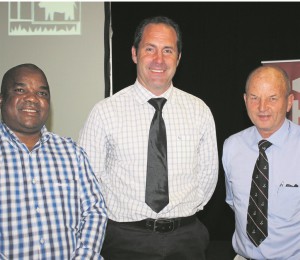 KWAZULU-NATAL’S agricultural union, Kwanalu, held its 17th annual congress at the Royal Showgrounds last week with members, farmers and agricultural leaders from all over the province reviewing the past year’s impact on the agricultural community

Andy Buchan, a well-known Greytown farmer, was elected Kwanalu president and in his acceptance speech said:

“The road ahead will no doubt be an arduous one, but I am confident in the strong team we have in Kwanalu. Agriculture is a vehicle in which we can serve the people, and I count it an honour to serve people.”

The theme of the congress was “cultivating our future”, which re-cognised and addressed the political, social and economic challenges currently facing farmers in KZN. Speakers encouraged members to remain progressive, pro-active and forward thinking in the coming year. Kwanalu plans to promote sustainable agricultural practices, social upliftment in all communities, economic growth and a secure environment with the intention of encouraging pride, and instilling confidence in the agricultural sector.

Guest speakers included Justice Malala, award-winning journalist, television host of The Justice Factor and political commentator who spoke about the noise of politics in South Africa from the perspective of a media commentator. Second guest speaker was best-selling business author and independent scenario strategist, Chantell Illbury, who encouraged farmers to see the upcoming trends globally, locally and within agriculture, as positive indicators for the future, and founder of the Wimpy Restaurants Group in the Southern Hemisphere, Eric Tocknell inspired farmers with his motivating address titled “Yes you can”. Kwanalu