Black people already own more than half of all agricultural land in two of South Africa’s most fertile provinces: the Eastern Cape and KwaZulu-Natal. This is according to an audit of land ownership, to be released this week.

Landowners who are not white own 26.7% of agricultural ground and control more than 46% of South Africa’s agricultural potential.

Twice as much land has been transferred to black entrepreneurs and farmers through ordinary commercial purchases than the state has managed to buy for black owners as part of its land redistribution programme, the study found.

These statistics are contained in a comprehensive land audit undertaken by economist Johann Bornman in partnership with magazine Landbouweekblad and Agri SA, which, with a large donation, made it possible to obtain data about hundreds of thousands of land transactions from the deeds office, as well as geographical data.

An audit of this type has never been done in South Africa and is being released amid huge political pressure to increase the pace of land reform.

Ernest Pringle, chairperson of Agri SA’s policy committee on agricultural development, said the organisation realised long ago that a comprehensive land audit was imperative because policy was being driven by perception and emotion, instead of facts. That is why Agri SA invested about R1m in the project.

“The picture of land ownership – and, more specifically, land ownership of high-potential agricultural land – actually looks totally different to what the perception is,” said Pringle.

More research will be done to formulate a clear strategy for a land plan that is consistent with the National Development Plan and the Constitution, and that will advance job creation and the protection of property rights, said Pringle.

Agri SA will release the audit, along with additional research, on Wednesday at its offices in Centurion. 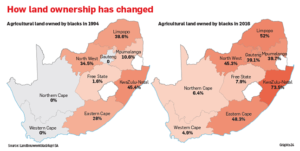 THE KEY FINDINGS INCLUDE:

– In KwaZulu-Natal and Limpopo, which have some of the nation’s most fertile land, more than half of agricultural land is owned by black people.

In three of the most fertile provinces – Eastern Cape, KwaZulu-Natal and Limpopo – more than 50% of agricultural potential is in black hands.

In addition, provincial governments and municipalities bought and redistributed about 600 000 hectares of land, said Bornman.

“It’s interesting to see that emergent black farmers are buying land in the areas that they originate from. isiZulu speakers usually will not buy in the Eastern Cape and isiXhosa-speakers will not buy in Limpopo.”

Bornman initially began the audit out of personal interest because “so much nonsense is spoken about land ownership”. It was later expanded into an extensive, nationwide audit after sponsors Agri SA and Landbouweekblad got involved.

Since then, Bornman has been working with a team of 10 researchers. He admits it was “uncomfortable” to do research in which race played a role. “We determined the race of new landowners by looking at names. That can lead to errors with names such as Des van Rooyen – also the name of the cooperative governance minister – but it would be a small minority and also, mistakes would lead to black ownership being underestimated, not overestimated,” he said.

“People of colour who bought agricultural land clearly focused on land that has high potential for agricultural development. We measured this by linking the land they bought in every district to the carrying capacity of the agricultural land in that district, as recorded by the department of agriculture.

“Altogether 221 000 transactions involving land between 1994 and December 2016 were analysed. To do a proper assessment of all the transactions, we built an internet platform to determine exactly what the situation was in 1994 and how it compares with land ownership today,” said Bornman.

It was an exhausting process because deeds office data had to be rectified when it contained mistakes. It also had to be adapted to provide for changes in the boundaries of provinces and agricultural districts.

The result is that it is now possible to determine exactly who owns what land in each of the country’s 340 agricultural districts, in respect of surface area (hectares), monetary value and agricultural potential.

To determine how much agricultural land there is in the country, a complete set of satellite images of the country’s total surface area of 122.5 million hectares were obtained from 1994 and from 2016.

The effect of market forces was also surprising. In the 23-year period examined by the audit, R90.3bn has been spent on land that is now owned by black people.

Of this, government bought 2.8 million hectares, for which it paid R20.5bn. Large areas of this land are today underutilised or fallow.

A large portion of the 4 million hectares of land that the government said it redistributed, is in the former homelands. The true figure is closer to 3.5 million hectares.

“One wonders how much success government would have achieved had it simply made the R20.5bn available to prospective black farmers who want to buy land through a financial institution such as the Land Bank,” said Bornman.

More findings will be made available this week on Landbouweekblad’s website, landbou.com, and will also be released by Agri SA on Wednesday