KwaZulu-Natal’s Agricultural Union, Kwanalu, today proudly announced the much anticipated winner of the 2019 Kwanalu Young Farmer of the Year at its Annual Congress held at the Royal Show grounds in Pietermaritzburg.

38-year-old Eshowe sugarcane farmer, Simon D’Aubrey, was awarded the provincial title of Kwanalu Young Farmer of the Year 2019 at the ceremony which was attended by Kwanalu members, farmer delegates, agricultural-industry leaders and businesses as well as representatives from Agri SA.

Simon will go on to represent Kwanalu and all KZN farmers in the Toyota SA/Agri SA National Young Farmer of the Year Competition 2019 which takes place in October where he will compete against top farmers from all nine provinces, in an effort to secure the much sought after title, as well as a brand new Toyota Hilux Single Cab.

“We are heartened by the positive attitude that all our finalists displayed; and are encouraged that they all view social development and land reform as an opportunity rather than a challenge. I must say it is very exciting to see young farmers who want to make a difference; with farmers like this in KZN we can only look forward,” said CEO of Kwanalu, Sandy La Marque

The KZN Kwanalu Young Farmer of the Year competition is open to farmers under the age of 40, male or female who are full members of their provinces agricultural unions. The judging and evaluation of the farmers and their agricultural practices, takes place at provincial level with the applicants being evaluated on all aspects of their business including their overall vision for the future of their farm/ business. The main features on which farmers are judged is their management/ business philosophy as well as the technical competence with which their philosophy is applied. 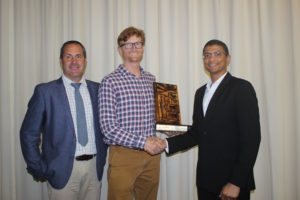 Simon, the third consecutive generation of his family to farm on Arcadia Estate in Entumeni in  Eshowe, joined the family farming business in 2013, and today is the sole director and is a 33% shareholder in the property company, a 100% shareholder in the operational company and is responsible for all farm operations of both Arcadia Estate and his other neighbouring farms. Simon holds a B-Tech Degree in Agriculture and a Degree in Property Development, with Honours in Construction Management.

Simon who describes himself as “not your typical farmer”, has travelled extensively and worked in many places around the world before settling, at the age of 32, on the farm he grew up on, together with his wife Emily and their twin daughters.

90% of his farming enterprise is sugarcane, with 8% dedicated to timber, and 1% to contracting and bottled water, firewood and cash crops on fallow lands respectively. Simon is currently working on diversifying the business’ income stream away from sugarcane to alternate crops. He also runs an indigenous tree nursery together with his brother on the farm.

“The challenge, and the goal as a farmer today, is to remain relevant, while maintaining positive cash flows and ensuring bank balances remain healthy. Pending a cannabis licence to grow hemp for CBD oil, we are ready to plant our first hemp crop. We are also currently running a test plot on organic lemons to determine viability and have 8ha of avos on order for 2021,” said Simon.

“We are focused on becoming more mechanized, for example, by restricting cane lands to the flat areas on the farms, timber to only on slopes over 30 degrees and high-value crops in close proximity to water and good soils,” explains Simon.

With the philosophy, “be kind to your land, honour your employees and be open to change”, Simon places strong emphasis on preserving the land for future generations and sustainable practices, and manages his farming methods by treading lightly on the natural environment and treating soils with care.

“We work with maintaining the eco-systems we currently have and aim to improve them with time through the use of less harmful insecticides and weedicides, the removal of alien vegetation and the re-planting of indigenous trees; for our soils we maintain our terrace banks and waterways and if there is soil erosion or wash, this is dealt with immediately, generally with advice from the SASRI Extension Officer. All replant cane fields are currently being pulled back 5m from major water courses and wetlands are being rehabilitated in the valley areas of the farms,” said Simon.

“The onus is on us farmers to produce healthy foods, free of pesticides and insecticide residue, sustainably for our burgeoning population at a cost which is competitive globally. Our predecessors managed to improve the yields at all costs; however I believe it is the role of the new generation of farmer to maintain those yields without the use of harmful agrochemicals whilst farming our land carefully with a long-term vision in mind,” says Simon.

With a focus on the future, Simon places a great deal of importance on his role in transformation in the industry and works closely together with the local community bordering his farms. He assists with the cutting, hauling and land preparation of cane for eight small-scale growers, ploughs and cuts grass for this community in the off-season and supplies drinking water and firewood during the drier months. He also assists with road maintenance on the road they share with the community.

“I have a good relationship with our Chief, Nkosi Dube. I also assist with advice on farming techniques and provide a link between my neighbouring small-scale farmers and the sugar industry,” says Simon.

“I believe that young farmers that contribute positively to the South African economy need to be both businessmen and farmers. Sustainability is key when working with natural resources. Young farmers need to be innovative to maintain yields, without the use of agrochemicals to ultimately provide food to a market that is very aware of what they eat, where it comes from and how it is grown and processed,” says Simon.

On receiving his award, Simon said the title was an honour and a privilege and that he looked forward to representing KZN farmers at the national event.