Fortmannspruit Primary School was founded in 1982 on Mooiplaats farm in New Hanover, by the Scheuer family, with just 28 students, two teachers and two small buildings. Registered as a section 14 government school, it offers education from crèche to Grade seven and caters mostly to rural communities in the surrounding area. 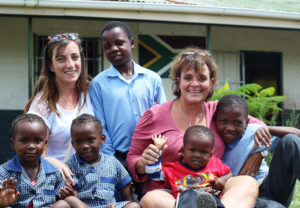 Since inheriting the school, Carol together with her daughter, Jo, have worked tirelessly to maintain and develop the modest farm school – investing their hearts and their time to caring for its children and their wellbeing. Not only are they responsible for repairs, maintenance, water and electricity; they also look after the student’s daily medical needs. The pair have facilitated the construction of an additional two buildings at the school.

“We don’t do it alone though” said Carol. The school and its children have captured the hearts of a small group of Australian fundraisers called “Dare to Care”. This group constantly facilitates fundraising initiatives to assist Carol in her efforts to make a real difference to the lives of the children at the school.

“My sister, Hayley Steyn, who lives in Australia, rallied a group of friends together to form a fundraising group for the school. They are constantly sending clothing, food, education supplies and additional finances to help build a better school and environment for our children,” says Carol.

Fundraising initiatives by the group include raising over R136 000 to build a new Grade R classroom and pay for a Grade R teacher and funding the purchase of 87 bicycles, so instead of walking to school and back every day, the children now ride, meaning the journey is that much easier and quicker.

Dare to Care are also helping to further the education of some of the school’s poorest and brightest students. Plant a Mustard Seed is one of the group’s programmes, which each year sponsors two graduates to attend the nearby Cool Air Secondary School.

“We wouldn’t function without these funds and the help we get from our Australian angels and our local community” says Carol.

Thanks to Carol’s tireless petitioning, the children at Fortmannspruit are given a full meal every day, subsidised by the government.

“One of the most important gifts we are able to give these children is a full, nutritious meal every day. It leaves me with a happy heart knowing that they are not going hungry while they are at school,” she said.

“I fully understand why so many have washed their hands of the schools on their land, but I can’t give up. It is because of the injustices I see every day and the few chances that they (the children) have, that I feel driven to do something, anything to give them a better life” said Carol.

“On a lighter note, I hope that one day, when my son eventually finds himself a wife, I will be able to pass our special school on to her as a wedding gift!” she said.