Pongola farmers have for the second time this year dug deep into their pockets donating to fellow farmers being crippled by the ongoing drought in the northern areas of South Africa.

Heeding the call by national body representing farmers, Agri SA, the Pongola Cane Growers Association collected and donated over R210 000 to the Agri SA Drought Fund after putting out a plea for assistance via WhatsApp.

“Aside from the money we donated, 2500lt of diesel was sponsored by Eco Fuels in Pongola for all trucks leaving town, transport for hay bales and feed was sponsored by various local businesses and farmers, and we had farmers who also offered their farms for grazing. The total value we sponsored was in the region of R210 000,” said Kurt Stock, chairperson of the Pongola Farmers Association.

Now for the second time in one year, big-hearted, sports-loving Pongola farmers who are members of the Suiker Boer Rugby Club, have once again donated to the Agri SA Drought Fund, this time handing over a cheque to Agri SA’s Deputy Director Christo van de Rheede, at Kwanalu’s annual Congress held last week in Pietermaritzburg.

The cheque for a further R5 670 was handed over to Andy Buchan, President of Kwanalu and van de Rheede, by Ferdie Brecher and Rocco Holl, two Pongola sugarcane farmers and members of the Suiker Boer Rugby Club.

Affectionately known as Die Suikerboere, the group of farmers from the Pongola farming community are members of the Suiker Boer Rugby Club who compete annually in the highly competitive Cape Town 10’s tournament in the Pro Vet’s league.

“We are all local farmers who are ex-rugby players, plus a few rugby legends from outside Pongola, older than 35 who still want to be active. We all love playing rugby and at the last Cape Town 10’s, we only lost in the semi-finals against the eventual winners, the SA Legends,” explaines Jors Strydom, Pongola sugarcane farmer and chairman of the Suiker Boer Rugby Club.

But more than just rugby, the now legendary Suikerboere, are also compassionate farmers whose vision includes strengthening their local community by hosting and raising money through various and regular sports tournaments in Pongola and then identifying projects and worthy causes to support and uplift those in need.

“Our vision at the Suiker Boere Rugby Club is through hard work and sport to raise funds for worthy causes in our community, as well as influence the younger generations to lead fit, healthy and purposeful lives. We are ex-rugby players who still want to be active, plough back into our community and create a buzz in town while doing it,” said Strydom.

The Club’s latest, a cricket tournament, raised R5 670 of which the farmers have donated to the AgriSA Drought Fund which since 2015 has been assisting farmers suffering from the ongoing drought in several parts of the country.

Sandy commended the farmers initiative saying that when farmers get “thrown the ball” so to speak of any challenge they are quick to find a game plan that has a winning formula.

“The selfless commitment of these farmers to assist fellow farmers who are in dire circumstances must be applauded,” said Sandy.

She encouraged and challenged more farmers’ associations to tackle challenges with positive interventions. 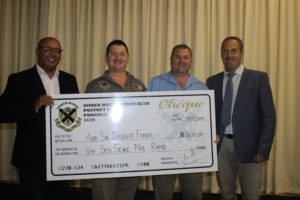