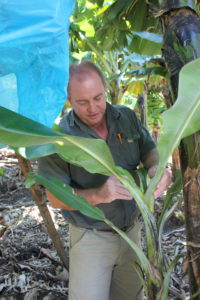 KZN banana farmers have been urged to monitor crops for signs of Banana Bunchy Top Virus (BBTV) which, if not contained, has the potential to cripple the country’s multi-billion rand banana industry.

The virus, which inhibits the growth of banana plants, ultimately leading to total crop failure, was first detected in South Africa in 2014 on the south coast where bananas are a popular farming commodity. More worrying is the second discovery of infected banana plants, in March this year, on a farm a mere 13kms away from the initial discovery of the virus.

Explaining the dangers of BBTV, Blaine Peckham, Chairman of the Southern KZN Banana Association (SNBA), said: “This virus cannot be eradicated, only contained.  Once it takes hold of a banana plant, the entire matt – from the mother plant to the suckers – has to be destroyed to prevent the spread of the virus.  This can result in the destruction of an entire crop.”

Although the virus is initially contained within the infected plant, “it can be easily and quickly spread by the banana aphid, the only vector for spreading the virus, as it moves from plant to plant to feed and establish a colony,” explained Pekham

“Furthermore, an infected plant will only start to show visible symptoms of the virus – leaves that 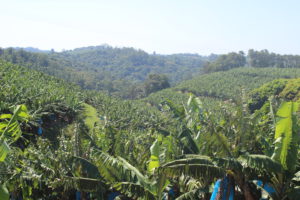 progressively get smaller from the outside in – two to three months after it has been infected. By this stage, the aphid carrying the virus could already have moved on to the next, healthy banana plant.”

Aphids are common on banana plants, but “have never been an economic pest until now,” he said.
“Left unchecked, this virus has the potential to devastate banana farms, the long term sustainability of the industry and the livelihoods of farmers and farm workers,” added Peckham.

Recognising the urgency of the situation, the SNBA have been quick to take action since the initial discovery of the virus, seeking assistance from experts, engaging with specialists and raising the alert amongst the local farming community through a series of study groups.

“At this stage, there is no governmental contingency plan in place to deal with the virus,” concludes Peckham, stressing that “the only way to control the spread of this virus is to be vigilant and proactively check your banana plants for signs of BBTV.” 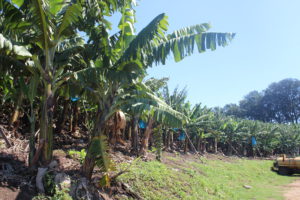 “Early detection, and elimination of the entire plant, is key in stopping this virus from spreading,” he added.

The SNBA have subsequently escalated the call to the Department of Agriculture for an urgent action plan to be put in place.

If you notice any signs that your bananas may be infected with BBTV, please urgently get in touch with SNBA chairman, Blaine   Peckham, on blaine@outlookfarm.co.za.