As a member-based organisation, we pride ourselves on listening to you, our members – the people on the ground – about the issues of importance to you so that Kwanalu remains relevant, credible, professional and represents the best interests of farmers at all times.
To this end our 2017 members’ survey, conducted at our Annual Congress held in September 2017, is insightful and hugely valuable to Kwanalu and our mandate; providing us with a platform for members to weigh-in on key issues and contribute to our continued strategic planning.

A promising future for farmers

What is promising to note is that, like last year, an overwhelming majority of our members are positive about their role in farming in South Africa and optimistic about what the future holds for them. 96% of members surveyed are committed to farming in the future (after land reform) with 95% believing they do have a future in farming despite the many issues farmers are facing. This, compared with similar figures from previous years, is testament to the resilience of our members and their passion for agriculture.

Current issues identified by members as critical include land reform and property rights, safety and security, the management of natural resources and the threat of mining. We have chosen to provide you with more feedback on these issues highlighted. 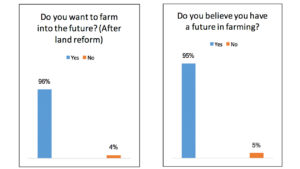 The question of land

Members are understandably concerned about what the government’s proposed restrictions to land ownership will mean for them as 90% believe they will not be able to farm sustainably should thresholds to land size and ownership be introduced. And Kwanalu agrees, arguing that should these “ill-considered” regulations be approved, the effect will be devastating not just for many farmers, who will no longer be able to operate on a feasible scale (90%), but will also lead to job losses which will have a negative impact on rural communities, the economy as well as compromise food security in the country. 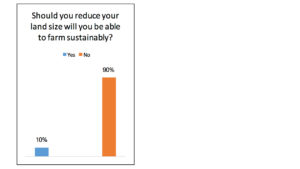 Overall, most farmers in KZN have good working relationships with their staff with only 21% not paying above the farm worker minimum wage. 69% provide free housing, access to water and electricity for their employees and on a positive note an overwhelming 92% are committed to improving the social conditions of their staff. 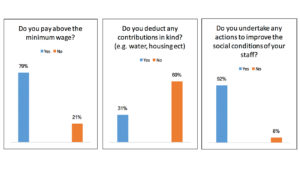 However, the application of the National Minimum Wage and draft Basic Conditions of Employment Act, according to 78% of those surveyed, is likely to have a negative impact on this relationship, with 74% saying they will have to reduce the size of their labour force as a result. Kwanalu will continue to argue that the goodwill shown and additional benefits (such as housing, electricity, food parcels, transport etc) by farmers towards their workforces must be measured and calculated into the new National Minimum Wage proposals. 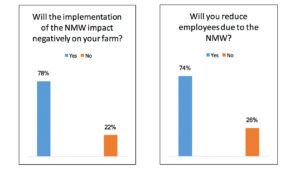 This issue remains of high importance to our members. The remote nature of many farms makes farmers more vulnerable to crime and, whilst 78% believe they have a good working relationship with the local police, 77% believe the police could be more active in their area. The majority of our members should be commended for taking the issue of safety and security as seriously as we do by reporting all crime and theft (no matter how petty) that takes place on their farms (94%), for being involved in a farm security cell (78%) and for regularly attending rural safety meetings through their local Farmers’ Associations (71%). Although these results are positive, there is no room for complacency and as such 71% of farmers surveyed employ the services of a private security company. 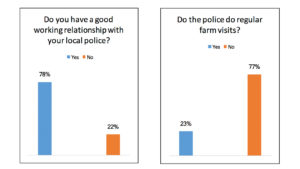 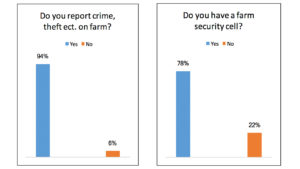 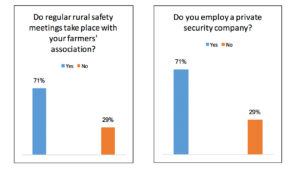 The safety and security of our members will remain a priority for Kwanalu with a focus on intervention and prevention and we stress the importance of members continuing to take responsibility for their own safety and that of their loved ones.

The mismanagement of natural resources, in particular water, is also a critical issue for our farmers, with over half of those surveyed saying they do not think water is sustainable to 2030. The threat of mining for alternative energy is also a concern for farmers with, reassuringly, 99% saying they would not allow “fracking” to take place on their farms. 90% though do believe that alternative energy sources should be explored. 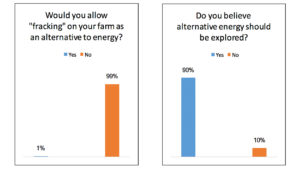 Our survey has encouragingly shown that farmers in KZN are committed to working towards meaningful transformation, with 86% believing that the onus in on themselves to implement this transformation process in their communities. Of this 86%, 95% believe that their role in transformation lies with mentorship and at local government level and 42% seeing the role as a financial one. 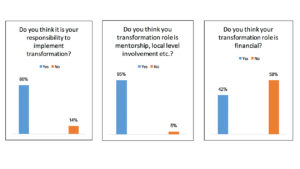 The survey also shows that farmers want more face-to-face engagement with Kwanalu. To this end, we will be implementing a strategy to strengthen relationships with our members through a series of road shows taking place early in 2018. We look forward to these and would like to encourage all members to attend when we are in their areas.

To further improve direct communication with members, we will also be introducing a WhatsApp broadcast service which will allow us to immediately and directly contact members with pertinent information, news and advice. Over and above this, Kwanalu will continue with our aggressive public relations campaign to continue to raise the image of the farmer with a focus on shaping the hearts and minds of the public to gain their support and backing.

Further, we were delighted with the number of positive comments showing your appreciation for the work we do at Kwanalu. Organisations with values and principles carry the credibility and relevance to shape opinions and influence views. Thank you to everyone who took the time to complete the survey and provide their feedback which will form the basis for our strategic plan going forward.